This Saturday, February 6, La Xavière is happy to learn the Pope’s appointment of Sr. Nathalie Becquart as Under-Secretary of the General Secretariat of the Synod of Bishops. Together with Father Luis Marin of San Martin, OSA, also named at the same time as Under Secretary, she will be an assistant to Cardinal Mario Grech, Secretary General of the Synod.

Cardinal Mario Grech, Sr. Nathalie Becquart and Fr. Luis Marin de San Martin will together form the management team of this Vatican Dicastery, composed of a dozen permanent staff members, in charge of preparing, organizing and following up the synods of the bishops.

What is the Synod of Bishops  ?

The Synod of Bishops is an institution that was created by Paul VI in 1965 at the end of the Second Vatican Council to be an instrument of counsel at the service of the Pope and also to prolong and strengthen collegiality – that is, collaboration among all the bishops – that the conciliar fathers had experienced during the Council. Recently Pope Francis, with the Apostolic Constitution Episcopalis communio (September 15, 2018), profoundly renewed the Synod of Bishops, inserting it within the framework of synodality as a constitutive dimension of the Church at all levels of its existence. In particular, the Synod is conceived as a process articulated in three phases:
– the preparatory phase, during which the People of God are consulted on the themes indicated by the Roman Pontiff ;
– the celebration phase, characterized by the gathering of the Bishops in assembly ;
-the implementation phase, during which the conclusions of the Synod, approved by the Roman Pontiff, are to be welcomed by the Churches. The central phase, during which the Pastors carry out the work of discernment, is in this way preceded and followed by phases that appeal to the totality of the People of God, in the plurality of its components.

The next synod, scheduled for 2022, has been convoked by Pope Francis, president of the synod, on the theme « For a Synodal Church: Communion, Participation and Mission ».

Pope Francis, during his pontificate, repeatedly recalled that synodality is one of the major paths in the life of the Church. On the occasion of the 50th anniversary of the creation of the Synod of Bishops on October 17, 2015, in one of the key texts of his pontificate, he stated: « The world in which we live, and which we are called to love and serve even in its contradictions, demands of the Church the strengthening of synergies in all areas of its mission. The path of synodality is precisely what God expects of the Church of the third millennium ».

The mission that Nathalie receives today, following her specialization in ecclesiology at Boston College School of Theology and Ministry where she conducted research on youth synod and synodality, is to serve the universal Church by serving the synodality of the Church, that is, this « walking together » in listening to the Spirit where all, baptized, whatever their vocation and function, are actors of the mission and discern together the calls of the Spirit.

We are happy with the place given to women in religious life by this appointment.

Nathalie Becquart is a 51-year-old French Catholic religious sister and a member of the Congregation La Xavière. From 2008 to 2018 she led the National Service for the Evangelization of Youth and for Vocations (SNEJV) within the Bishops’ Conference of France. In May 2019, she was appointed Consultor for the General Secretariat of the Synod of Bishops.

Nathalie Becquart was born in 1969 in Fontainebleau (France). She joined the Xavieres sisters in 1995 after a year of volunteer work in Lebanon and two years of professional experience as a Marketing-Communication consultant. She took her first vows in “La Xavière” in 1998 and her final vows in 2005.

La Xavière is an apostolic religious congregation of Ignatian spirituality which celebrates its centennial of foundation this year. Founded in 1921, the institute was officially recognized in 1963 by the Catholic Church under the name « La Xavière Institute, Missionary of Christ Jesus ». It was recognized as being of Pontifical Right in 2010. It now counts 115 members in about twenty communities on three continents: Africa, Europe and America.

Sr. Becquart graduated from HEC School of Management, Paris in 1992, with a master in Entrepreneurship, and she obtained a double canonical baccalaureate degree in philosophy and theology in 2006 from the “Centre Sèvres-Facultés Jésuites de Paris”, supplemented by training in sociology at the EHESS (2004-2006).  She is just completing a canonical Licentiate in Theology at Boston College School of Theology and Ministry (specialization in ecclesiology with a research on synodality).

She spent nearly 30 years in youth ministry and is a specialist in youth issues, youth evangelization and vocation ministry. She held various responsibilities in the service of youth and young adults. She was the national leader of the Plein Vent program (Scouting in working-class urban neighborhoods) of the Scouts of France (1999-2002), a Spiritual Director within the Ignatian Youth Network (1998-2008), the head of Campus Ministry at the university of Créteil from 2006 to 2011, the President of the association « Life at Sea, Entry into Prayer » (2006-2010).  In 2012, she was the first woman to be appointed as the Director of the National Service for the Evangelization of Youth and for Vocations within the French Bishops’ Conference after being the Deputy Director of this service from 2008 to 2012 in charge of university pastoral care.

From 2015 to 2018, called by Bishop Michel Aupetit, she was a member of the Episcopal Council of the Diocese of Nanterre.

She was particularly involved in the preparation of the Synod of Bishops on « Youth, Faith and Vocational Discernment » in France and at the Vatican as General Coordinator of the March 2018 Youth Pre-Synod and as an auditor at the October 2018 Youth Synod.

Lecturer and formator, she is the author of numerous publications including:

Chapter On Christus Vivit’s chapter 2: Jesus, Ever young – The deep connection between Jesus, young people and the Church 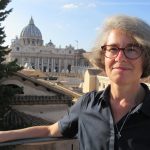